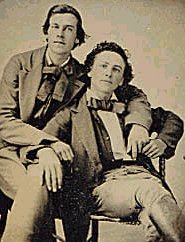 When photographing men together I usually have to say, “Move closer, move closer” over and over. In my experience, men are far less likely than women to stand close without instruction. Most (but certainly not all) men are also less likely to touch each other even with instruction.  It is a challenge for a photographer who wants to communicate connection and friendship if there is physical distance between the subjects.

When I first started photographing gay couples, I was surprised to see this same dynamic playing out.  I thought that gay men would be immune to this cultural precondition of our day, but I’ve learned that is not always the case.

At my first few same-sex weddings, I found myself struggling to make photos that communicated intimacy in part because I didn’t know what that photo would look like for a same-sex couple.  I know what images of love look like because of the wealth of media out there that has informed me.  For instance, I’ve never seen anyone spontaneously dip their beloved, but I know “the dip” communicates love in a picture because I’ve seen that concept in the context of love in still photos, TV, movies, etc and so I accept “the dip” as a representation of love.

When it comes to same-sex couples, there are far fewer images of what their love looks like.  In fact, when I first was struggling with this, I googled every search term I could think of and I did not find a single wedding photo. Instead, the search results returned links to pornography. So I decided that I need to dig more deeply into this to learn more.

In my research to better understand my same-sex clientele, I’ve begun reading gay history books.  I was incredibly excited to discover a book called Dear Friends: American Photographs of Men Together 1840-1918 by David Deithcher.

Would you believe there is a visual history of men in the late 1800s together, touching!  Thousands antique photos were discovered in places like flea markets and yard sales and are now in private collections.  Most of the subjects, photographers and circumstances are unknown.  But to me, these images speak volumes.  They speak of a time when men posed for their portrait touching.  Yes, it is likely the photographer told these couples how to hold themselves or each other, but I can say with experience I’ve struggled to capture photos of men looking this caring and relaxed together in a perceived more “progressive” time.

Deitcher describes being drawn to these photos in part because the LGBT community is “image-starved.”  He admits that there is no way of knowing if these men were couples, but regardless, it provides us with an image of what intimacy (be it romantic or friendship) looks like between two men.  In studying gay history, I have further learned that the word “homosexuality” was not introduced until the late 1800s and the word “lesbian” did not become common until the 1930s or later.  Furthermore the liberal New York Times did not print the word “homosexuality” until 1926 (Alsenas, Linda. Gay America, 2008).

This reminds me how the language we use can influence what people think about.  If you don’t have a word for something, it doesn’t mean you can’t have a concept of it, but you are less likely to think about and conceptualize it.  Perhaps this is why men could freely express physical affection in a time when many did not have a linguistic concept of homosexuality.

This also makes me think of one of my bones-to-pick with the wedding industry at large, which purports that our client is “the bride.”  I realize that, ten years ago, I felt unprepared to photograph a wedding without a bride since the language of my craft, and my experience, did not prepare me for such an event.

For me, as a wedding photographer, Dear Friends, offers me a visual reference for a group of people who remain “image starved” (although less so).

I am excited and honored to be making photographs of two men or two women that will forever be seen as, not just Dear Friends, but as Dear Lovers.