At an open studio event last year, Kathryn and I were asked: “Who leads when a same-sex couple dances?” You might imagine that the answer would follow our typical advice: “Don’t assume! Ask!” But, I wanted to dig in to this question more deeply so I sought out an expert in the field, Liz Nania of Out To Dance. Liz offers LGBTQ dance-classes in West Roxbury, MA.  As you might imagine, there are a lot of similarities when considering placement or role in dance and wedding portraiture because both are based on very traditional and dualistic gender roles.

“Who leads when a same-sex couple dances?”

Why offer an LGBT dance class in the first place? 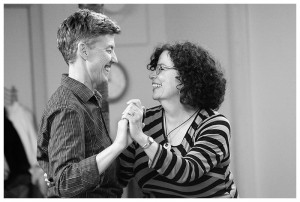 Liz Nania: I offer LGBT dance classes because as a lesbian, I know that it’s not always comfortable or friendly to learn to dance in a non-queer dance class. Learning something new as an adult can be intimidating to some folks, especially a physical skill in a group setting, so an LGBT dance class offers a really comfortable environment for queer folks. Plus it’s much more fun to be dancing with others who specifically want to dance with same-sex dance partners; this actually builds friendships and creates community. The people in my LGBT classes, both singles and couples, often get to know each other outside of class by going for coffee or dinner, and by going to dances together in groups.

“I recall my well-meaning sisters scoffing when I said I was too embarrassed to take conventional dance classes. They didn’t understand how it feels to be the only gay/ transgender person in a room, especially in the traditionally gendered atmosphere of dance class. You were Fred or Ginger according to your birth certificate–period. OUT To Dance classes changed all of that for many people for the first time.” Kathleen A. Carbone, Somerville, MA.

Is there anything different about instructing a same-sex couple in dance than an opposite-sex couple?

There’s one thing different about teaching same-sex dance partners, and it’s a big bonus: either one can choose to lead or follow! This makes dancing a whole lot easier for same-sex dance partners, because the best person for the job gets it! The “best” person to lead is the one who wants to; same thing for the follower. (And, for the record, people who see a same-sex couple dancing can rarely tell who’s following and who’s leading.)

Have you seen an increase in same-sex couples doing a “big first dance” since the law changed in 2004? 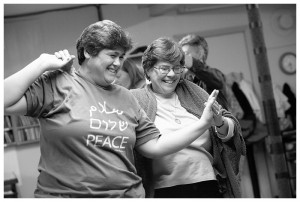 became legal here; but the increase is due largely in part to the surge of legal marriages. As queer folks we get to pick and choose what traditions we want to include in our weddings, so anything is up for grabs. May it always be so! But besides a heartfelt ceremony, the first dance as a married couple is my favorite tradition!

Find more about Liz Nania and her inclusive dance classes at OutToDance.com.