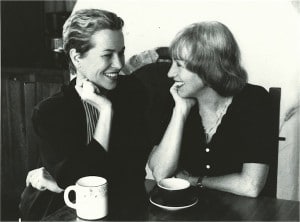 This review was originally published by Renate Stendhal and Kim Chernin, authors of Lesbian Marriage: A Love and Sex Forever Kit, with high marks (5 of 5 stars) on Goodreads and Amazon.

How refreshing to see conventions fall and be replaced by the new images that reflect our evolving culture. Here is a guide that tells gay and lesbian couples how to create beautiful, poignant, romantic, funny, authentic wedding photos – from the moment of their engagement to the preparations, the ceremony and celebration to the final toss of the bouquet. Couples who plan to get married and are seeking inspiration for the best possible documentation of their big day can turn to Kathryn Hamm and Thea Dodds: they are in expert hands. Gorgeous photography (by a number of photographers in addition to Thea Dodds) and beautiful writing by Kathryn Hamm (president of GayWeddings.com) guide the reader.

The book begins by discussing the differences between same-sex and traditional wedding photography. Same-sex couples, for instance, may not have family present for their wedding, they may prepare together, they may have married the same person already multiple times, may have been together for decades, may not be comfortable with public display of affection, and might not be legally marrying at all. No more big groom in black hovering over little woman in white. LGTBQ couples see themselves, present or pose themselves, differently. Nothing can be assumed. Will all gay couples want to hold hands in public? The New Art of Capturing Love teaches wedding photographers a new sensibility toward a topic that has only existed for ten years and opens new doors every day.

Just turning the pages of this book is an exercise in consciousness raising, an enchanted tour through the creation of a new gay, visual culture.

There are tricks and techniques to loosen couples up and get them ready to be their authentic self in authentic photos. And of course there are props, costumes, unexpected weather, spontaneous responses to a rainy wedding day, unusual and arresting stagings like rooftops or a fire escape. There are humorous snapshots, like the two ecstatic newly-wed lesbians on a New York escalator. The gay men in this book adopt eye-to-eye and tender skin contact, not standing shoulder to shoulder, as men so often do, looking out into the middle distance as they converse. Great care is taken to show the couples’ natural affection by giving them permission to be affectionate.

So many of the photos in this album are effortlessly sexy and romantic, with their playful focus on shoes, for instance, or their commitment to breaking the “bridal bias” so that the focus in this egalitarian photography is always equally on the two people getting married.

The technical quality of the photographs is superb, with a natural and spontaneous look, although most of the photographs are posed. There’s an inimitable photo of a bridesmaid in flip-flops surrounded by her male fashion police, pointing with comic outrage at the shoes. Or, how about flower-boys to give you a sense that the world has changed? Or male nymphs in a romantic outdoors wedding, doting mothers and grandmothers, and double bouquets being tossed in the air. Just turning the pages of this book is an exercise in consciousness raising, an enchanted tour through the creation of a new gay, visual culture. 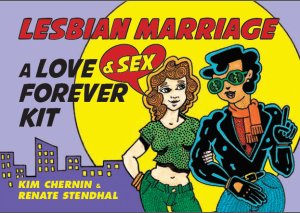 Kim Chernin and Renate Stendhal are prize-winning writers as well as relationship experts. After a cross-cultural relationship of 28 years, they are now a married couple. They are co-authors of Lesbian Marriage: A Sex Survival Kit, their third co-authored book and first relationship guide book for married and soon-to-be-married lesbians. Kim has won acclaim for her numerous works of fiction, nonfiction, and poetry, including The Obsession, In My Mother’s House (Nominated for Chronicle Critics Award and Chosen as Alice Walker’s Favorite Book of the Year in 1983 New York Times), The Flame Bearers (1986 New York Times Notable Book and recipient of an NEA Grant for Fiction) and the National Best Seller The Hungry Self. Renate is German-born and Paris-educated. She works as a writing coach and relationship expert in the San Francisco Bay Area, offering intuitive listening and common sense conversation for www.couplesbianloveforever.com and individuals. She is a cultural critic and blogger and the award-winning author of several non-fiction and fiction books.