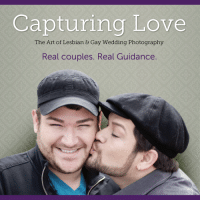 With stunning examples, visual guide debunks the myth that “same-sex couples are just like straight couples” and can be photographed the same way.

WASHINGTON, D.C. (February 6, 2013) – Veteran photographer Thea Dodds and wedding innovator Kathryn Hamm, authors of the groundbreaking guide Capturing Love: The Art of Lesbian & Gay Wedding Photography (Authentic Weddings, $32.95), will celebrate this Valentine’s Day with a new appreciation of what works—and what doesn’t—when it comes to creating spectacular engagement and wedding portraits for gay and lesbian couples.

Together, the two authors, one a New Hampshire-based wedding photographer and the other a Virginia-based same-sex wedding expert and educator, spent countless hours last fall exploring the notion that the current mainstream wedding photography resources available to photographers are insufficient in a changing marketplace, which now includes increasing numbers of same-sex couples.

Their conversation and realization led to the consummation of their own publishing firm, Authentic Weddings, and their first book, Capturing Love, designed to help photographers understand how photographing same-sex couples can be different from heterosexual couples even though they now share the same legal marriage rights in nine states (MA, IA, CT, NH, VT, ME, MD, WA) and the District of Columbia.

“Simply put,” Dodds says, “what works for a straight couple won’t always work for a gay or lesbian couple. Weddings are changing, and photography education needs to change, too.”

Featuring stunning example photographs from 38 of the top gay and lesbian wedding photographers, and showcasing 46 same-sex couples, Capturing Love debunks the myth that “same-sex couples are just like straight couples” and can be photographed the same way. Through these examples, through personal stories about the couples photographed, and through detailed commentary from the authors, the guide provides a compelling new look at how couples are changing in the 21st century, and how weddings are changing with them.

Select images from Capturing Love are available by request, if used with proper attribution.

“We are deeply grateful to the talented photographers and couples who have shared their inspired images of authentic love with us,” says Hamm. “They have allowed us to indulge as deeply in the promise love and commitment as we might in our favorite box of chocolates on February 14, and we are excited to share our collaboration with the growing number of professionals, couples and loved ones interested in learning more about gay and lesbian weddings.”

“We have been completely floored by the response Capturing Love has received, including expressions of excitement, inspiration, and—even—tears of appreciation and empathy,” say the authors. “We had hoped that Capturing Love would resonate with the photographers for whom we created it, but we are equally thrilled to know that engaged couples and other aficionados of authentic love are equally smitten by this moving collection of loving couples.”

More information about Capturing Love is available at https://www.capturingloveguide.com.

About Capturing Love: The Art of Lesbian & Gay Wedding Photography

Written by Thea Dodds and Kathryn Hamm, and published by Authentic Weddings in January of 2013, Capturing Love: The Art of Lesbian & Gay Wedding Photography is currently available in limited release via Lulu Press. The first-of-its-kind guide will be available in print and as an electronic version in nationwide release in March 2013. The authors will be making several appearances in the coming months to promote Capturing Love, including appearances by Hamm at the Catersource Conference & Tradeshow in Las Vegas, NV on March 10-11, and at Princeton University’s LGBT and ally alumni event Every Voice on April 10-13. For more information, see https://www.capturingloveguide.com.

Kathryn Hamm is the President of GayWeddings.com, the leading online boutique and resource dedicated to serving same-sex couples. Since its founding in 1999, GayWeddings.com has supported thousands of same-sex couples and LGBT-friendly vendors. Kathryn writes, speaks and consults on the topics of why same sex weddings are meaningful and why marriage matters. Though she and her partner, Amy, exchanged vows in a memorable ceremony on the Eastern Shore of Maryland in 1999, they are not yet legally married. They plan to spend Valentine’s Day helping their son make valentines for his kindergarten class and will celebrate their 20th anniversary together in March.

Thea Dodds, an award-winning wedding photographer, founded her firm, Authentic Eye, in 2004. She also co- founded the internationally recognized non-profit Greener Photography in 2008. Her work has been featured in various publications, including Newsweek, The Lakes Region of New Hampshire, Kearsarge Magazine, Vermont Vows, and NH Magazine’s Bride. Thea and her partner, Bryan, live on a 10 acre farm in New Hampshire with their two young children, Kyra and Aubrie. They are not legally married, but Kathryn reminds them regularly of the advantages that a legally recognized union can offer.